In Which the Universe Sends me a Present. Or, Turning the Negative into the Positive. 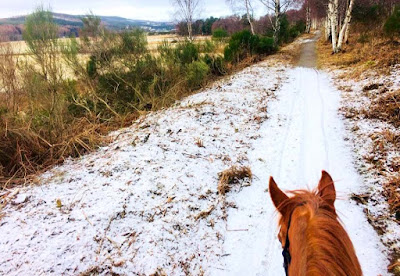 This is a very, very long story. You might want to get a nice cup of tea.

Last week, my poor old car catastrophically failed its MOT. Luckily, the Garage Man is used to me and  my peculiar ways, and accept that I run my perfectly nice Audi as if it were an ancient Landrover. It goes across muddy fields and up potholed tracks and it is full of timber, hay, and horse feed. There are two dandy brushes and a rather nice leather girth on the front seat. It is not a thing of beauty, and but it’s got a lot of poke, and that’s all I care about. So he smiled with understanding and set about putting the jalopy to rights. This morning, I had to go and pay for it. At which point, I discovered I had lost my debit card.
The critical voices fired up in my head, high on gin. What an idiot, they said. How many more times are you going to lose that card? What are you going to do now?
The last time I lost the card was in the set-aside. Luckily, it had just been snowing, so the little blue bit of plastic showed up against the white. A new blizzard was blowing in and I found it just in time. Then, I promised myself I would never, ever again put that card in my pocket. Yesterday, for no known reason, I put it in my pocket. Now it was not in the pocket.

I stumped down to the horses, chastising myself. A friend had come to take the mares for a walk. ‘Right,’ I said. ‘We are on a mission. We have to go to the woods and see if we can find my debit card.’ I had a picture of it nestling in some mossy grove, like Hansel and Gretel.
My friend took this on the chin.
Off we went to the woods, the mares moseying along behind us on their long ropes. We retraced my steps. We scoured the ground. We went up by the golf course and ran into the postie. I told him all my troubles. He took my number and said he would keep an eye out and call if he saw the errant card. That’s my village, I thought. Everybody is ready to help.
Of course there was no sign of the stupid card. The critical voices were doing their drunken cackle again when I suddenly looked at my red mare. She had her head up and her ears pricked. I suddenly realised where we were. We were looking at the Evil Golfers on the Hill of Doom.
The Evil Golfers on the Hill of Doom were the villains of my last horse book. They had become emblematic of everything I had not yet achieved with my horse. I wrote about them with as much raw honesty as I could, but I could not exorcise them. They haunted me.

I’ve worked for four years to get my mare confident and relaxed. I’ve taught her coping skills. I’ve concentrated on getting my own head right so I can give her all the trust and belief that she needs. Working a horse in this way is not a technical thing. It’s not flying changes and kick on. It’s a soul thing. I’ve watched her go from an unsettled, uncertain, reactive creature who could not deal with a puddle to an easy, peaceful person who gives rides to children. I feel absurdly proud of this.

But one day we went up to the woods by the golf course and she saw the Evil Golfers and she completely wigged out. I could not comfort her. Those damn golfers were had a cunning plan to kidnap her herd and she would not be reassured.
The Evil Golfers stayed in my head like a nemesis. They were the visible marks of how I had failed my horse. If I was good enough, if I was empathetic enough, if I was clever enough, I should be able to convince her that the golfers were just ordinary humans who had no intention of committing grand larceny.
Yesterday, on account of the car being in the garage, I rode the three and a half miles to do my work at HorseBack, a local charity for which I volunteer. It’s a long old trek, and the mare dealt with it pretty well. But on the way home, she suddenly had an Evil Golfer moment. She lost all her confidence. I still don’t know what it was that upset her, but the world was suddenly too much. I had to think hard and act fast. I tried a few things and I got her back, in the end. In the end, we cantered all the way home on a loose rein.
I should have been very happy about that and in some ways I was. She is a complex character and she always asks me for my best self. I was pleased that I had been able to set her to rights. But in the dim light of the evening, I started having the Evil Golfer angst. She should not be getting frightened if I am doing my job properly. I was missing something. I would have to go back to the beginning again.
I was also afraid that I had been quite hard on her. I had listened to her and I had been empathetic and steady, but I had also been very firm. Perhaps I had been too firm. Maybe we had taken a huge step back.
And then, this morning, she looked up to the Hill of Doom, the place that had once had her unglued, and pricked her ears and had a little think. I could almost see the thoughts running through her head. ‘Ah,’ she said. ‘This was the place where the Evil Golfers hatched their evil plots. But I don’t think they are going any of that nonsense now.’ And she dropped her head, relaxed her ears, wibbled her bottom lip, and went into her Zen mistress mode.
I stared at her in astonishment. Yesterday, her heart had been beating like a big bass drum at a phantom I could not see and now she could deal with the Evil Golfers.
I whooped. I exclaimed. I flung my arms round her neck. I told her she was the bravest mare in the world.
My friend watched this with polite interest. I told her the whole saga of the Evil Golfers and the endless chorus of the critical voices.
‘The amazing thing is,’ I said, ‘is that if I had not lost that stupid debit card we would never have come this way and I would never have known that the red mare has conquered the Evil Golfers. It’s the best present in the world.’
I felt like Charlotte Dujardin breaking another world record. It sounds a bit bonkers, but this is beyond question the greatest achievement in my horsing life. I felt like I could do anything.
The kind friend walked back with me and took me to the garage where she generously offered to pay the bill. ‘I have no card,’ I said to the Garage Man. ‘But I have a friend.’
He smiled at me. It was not a problem. I could come in and settle up when I was back to rights. He really does know my funny little ways. He’s a very nice man and I felt a warm feeling of belonging. People are talking a lot about community at the moment, and how it can literally save your life. It’s more important to life expectancy than eating well or laying off the hooch. There are TED talks about it.
I had so much community this morning. I had my kind friend. I had the lovely postie. I had my little herd, who do not fear the golfers. I had the understanding Garage Man.
‘I don’t think that would happen,’ I said to my friend, ‘if I were living in the Finchley Road. I am part of this village. They know me here.’


They know me, and my mighty horse knows me. She knows I won’t let the Evil Golfers get her. She could not have given me a greater gift than that conviction.
at 13:31