In which I am a little bit of a wimp. 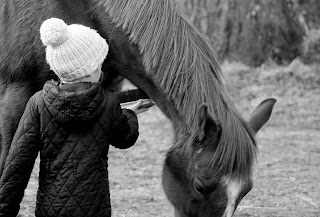 I wrote a long and rather serious and possibly controversial blog today. Then I stared at it in doubt. Did I really want to wade into those treacherous waters? Did I want the comments section to turn into a debating club? Did I want to set angry hares running?

It’s a sweet, sunny, mild day outside, and I spent the morning taking a four-year-old friend to see the horses – ‘Can I make their breakfast? Can I brush them? That looks like a good brush.’ Then I went and did my HorseBack work and then I came back and did my own work. My horrid bug has gone, and I made some excellent carrot soup. Everything was small and quiet and rather lovely.

No, I thought, pressing the delete button, I don’t want to get into bomb-throwing. I think it’s probably rather pusillanimous of me, but I don’t feel sturdy enough to take the slings and arrows. I’ve always been rather envious of the people who love nothing more than a juicy shouting match, but I loathe confrontation. I have the slightly tragic yearning for little birds in their nests to agree.

Someone said something to me this morning with which I radically disagreed, and I bent over backwards to see his point. It was his point, after all, and he felt very strongly about it, and who was I to take it away from him? So I scrabbled about until I could find some common ground on which we could stand, and, rather diffidently and with much use of irony, I put a little of my opposing point of view, and we tacitly agreed to disagree. He said his piece and I said my piece and it was not an argument at all.

As I was making the soup, I stood in the kitchen and thought: I’d like only to write kind things about people. There are politicians and pundits out there who drive me batshit nuts in the head. I think some of them are using their power for evil instead of good and I think some of them are not decent human beings. I could leap onto my soapbox and rant and wail; I could run for the moral high ground and plant my flag. Occasionally, I do, but I always feel rather grubby afterwards. Am I so flawless? Is my opinion so important? Does my voice really need to be heard?

Yet I think of all the people who did shout and did protest and did stand up and be counted. Without them, I would not have the life I have. The suffragettes fought a bloody good fight, and I’m not sure they did that so I could stay silent and keep my head down and not frighten the horses.

I can’t work out where the balance lies. I’m always looking for balance, and I’m never quite sure that I find it.

On the Today Programme this morning, Jim Naughtie was talking about Tam Dalyell, who has died. ‘He was a man of immense kindness,’ said Naughtie. Yes, yes, I thought; that is an obituary. That is how I would like to be remembered. Kindness, kindness and more kindness. I used to want to be remembered for charm and wit and brilliance. (I was very young and very idiotic.) Now, I’d like to be thought of as kind. It’s not very cinematic and it won’t make any headlines, but without it, there is nothing.

That’s why I slightly hate myself when I start waving my critical flag. Even if the criticism is well-founded, it still makes me feel a little shoddy and arrogant and cheap. But without the good critics, there is no progress. I don’t want to be a carper, but I don’t want to be a wimp either. Couldn’t it be like training a dog, says my slightly tragic hippy voice. Ignore the bad and reward the good? Instead of wading into every fray with all guns blazing, hunt down the good stuff, the hopeful stuff, the kind stuff, and shine a light on that instead? Could that be my mission, should I choose to accept it?
at 15:15