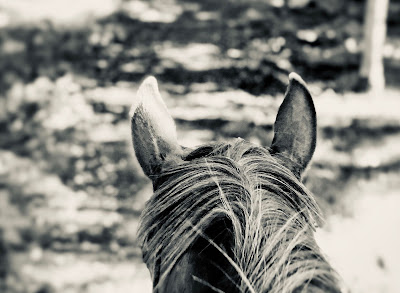 Out in the world, far away from the Brexit shouting and the political shenanigans, there is a horse called Enable. Today, she is going to go out onto the smooth green turf of Longchamp to try and make history. Few horses have won the Arc De Triomphe twice. No horse has won it three times. Enable is going to give it a shot.

What is it about Enable? Well, to start with the obvious, there is the beauty. She does not have a delicate, show pony prettiness. She has the grand, blooming beauty of a powerful athlete. She is all muscle and sinew: she is absurdly strong in the shoulder and magnificently deep in the girth. When Frankie Dettori asks her to go, she lowers herself and lengthens her stride as if she is defying the laws of physics. She pins her long, elegant ears back to her head in the classic pose of the boss mare, almost shouldering lesser creatures out of the way. The moment she passes the post, she pricks those ears and lifts her head, ready for her close-up.

There is also the brilliance. Most talented horses, even the great champions, have an off day. There are those mysterious times when they simply do not run their race. Nobody really knows why. Enable always runs her race. She always pitches up, swinging. She’s won her last fourteen contests, including a clutch of Group Ones. And she hasn’t done it the easy way. She’s travelled the world; she’s done it on different ground, on different courses, over different distances. Last year, she went to the glorious jamboree that is the Breeders’ Cup, and, in a land that practically invented razzmatazz, she dazzled the Americans. ‘They treated her like a film star,’ says Frankie, and she did not disappoint.

Then there is the courage. Enable has not always floated to victory. She has scrapped for it too. Last year, she won the Arc by a whisker when she was only 85% fit. This year, she threw herself into the heat of battle with Crystal Ocean, officially the best horse in the world at the time, and almost cowed the colt out of it. I think she broke his heart that day, through sheer guts and an inexorable will to win. She’s got raw bravery to go with her brilliance.

She has a dazzling array of enchanting qualities, the sort of things you would look for in a human. She is eternally enthusiastic, relishing her work, banging at her box to get out in the morning. John Gosden says that she always wants to go with the first lot, ‘so you don’t make her wait for second lot’. She has a bright aspect and an intelligence you can see at the races, as she comes into the paddock with her head held high, surveying the crowd as if she knows they are there for her. ‘Look on my works, ye mighty,’ she says. ‘Hello, mere mortals.’ Some horses, even the great ones, don’t care for the hullabaloo; they are flight animals after all. But there are some, and Enable is one of these, who seem to soak it up, to feed off the energy, to understand, somewhere in their horsey heads, that these teeming humans come in peace. And, rather amazingly, for a steely, finely-tuned athlete, she is a very nice person. ‘She’s so friendly,’ says Imran, beaming.

In racing terms, she is the ultimate. She has dazzling tactical speed, which means Frankie can put her anywhere he wants in the race. She is incredibly genuine, so when she asks her a question, her answer is always yes. She is unusually versatile - she can sit off the pace and wait to pounce; she can grab a race by the scruff of its neck and make everyone else play catch-up; she can settle quietly in mid-field and steal through the gaps. Even if she gets caught out wide and has to go round the houses, she’ll still fire her booster rockets and soar to triumph.

In Dettori, she has the perfect partner. He respects her so much that he wins top races with, as John Gosden says, ‘hands and heels and one flick of the whip.’ He visits her in the mornings, just for a little chat and a Polo. The last time Enable and Frankie were together in public, this professional sportsman - one of the greatest jockeys ever seen, with a racing brain second to none - burst into tears on national television. Usually, Frankie never stops talking, but on that day, he could hardly get a word out. And when he does have the words, the one he uses most often is love.

Perhaps that is why today is so special. It is about love, not money. Everyone involved with this mare has plenty of money already. The punters are not going to make their fortunes, because she will go off at long odds-on. There are no franchises, rubbing their hands - there won’t be Enable t-shirts or Enable theme parks. She’ll go quietly off to stud after this and have her brilliant babies and those of us who watched her and cheered her on will be left only with memories.

I think the crowds love her because she always turns up for them. She never lets them down. She is all authenticity, in a world of fake news and fake outrage and fake politics. She would not know a shoddy thought or a mean emotion if she saw one. She gleams above us humans, in those mysterious plains across the species barrier, like something pure and true. In a time when gracelessness seems a public currency, she is all grace.

It doesn’t matter whether she wins today. The weight of history is against her. The rain has come to Paris, and very soft ground might blunt some of that invincible speed. It’s the Arc, where anything can happen in the hurly-burly. Fifteen wins on the trot might just be one too many to hope for.

If she can do it, she will go into the pantheon of the immortals, and I shall shout and cheer and cry. Like Frankie, I love her. But all that matters is that she comes home safely and goes to Prince Khalid’s pristine paddocks and has her fine foals.

Whatever happens, she has left an indelible mark on those who have been lucky enough to see her in action. She is truly a horse of the heart, and she owes no debt. She has given of herself, generously, freely, and she is a champion for the ages.