Lester’s boots. Or, love and grief.

She has been ill for a long time. I have not written about it, for two reasons. First of all, I did not want to be a bore. (I am British. Being a bore is almost my greatest fear, apart from going mad in the night and waking up in the belief that I am Queen Marie of Roumania.) Second of all, until the final days when she was too weak to look at the internet, she used to read this blog. It cheered her up. She liked hearing about the red mare and seeing the pictures. I did not want her to tune in and find me wailing about her horrid pain.

She was in horrid pain, mostly from osteoporosis, which is an absolute bastard. Eat your calcium, I want to shout at everyone. Don’t go on stupid diets; get those bones lovely and strong.

She bore it with great stoicism, until, in the end, it was too much for her, and she went gentle into that good night. It was very peaceful, and she held my stepfather’s hand as she slipped away.

I don’t have any regrets, because I have made her breakfast every morning for the last few years, and took in her Racing Post each Saturday, and talked of Golden Horn and Treve and all the horses she loved. Sometimes, after a great race, she would ring me up and say: ‘Are you crying?’ And I would say: ‘Weeping like a mad woman.’

I’m so glad she saw Frankel, whom she adored, and Kauto Star – ‘he has the look of eagles, just like Arkle’ – and Quevega and Annie Power, her two favourite mares. ‘Oh, Annie,’ she would say, with a dying fall, as the mighty athlete powered to another soaring victory. She loved Ruby Walsh and AP and Sir Henry Cecil, whom she knew from the old days in Newmarket. ‘Henry did love his roses.’

And I do have regrets, because however much you have done, and however much has been said – ‘I love you,’ I said yesterday, as I went out of the door to see to my own mares – there is always the wish for one more question, one more story, one more checking of the facts. She was my last archivist, and now she is gone. I wanted to ask her again about the time she saw Mill Reef, and how she and Dad went to Nijinsky’s Arc (Dad lost a fortune), and what it was really like when Arkle won the Gold Cup.

Most of all, I wanted to hear for one last time the story of Lester’s Boots.

This is a story that has gone into family folklore, but I can’t tell how much has been embroidered over the years. When my mother and father were young, they were very beautiful and rather glamorous, and, on the racecourse, they met all kinds of fascinating people. Just after Lawrence of Arabia came out, they went to Newbury with Peter O’Toole. (The bit I can’t remember is how or why. What were they doing with Lawrence?) Drinks were taken. As they went to the car park, they lost O’Toole, and turned round to find him weaving towards them, a look of devilment in his eye and a suspicious lump under his coat.

As they drove away, he sat up in the back seat, fumbled under his coat, and produced a pair of riding boots. ‘Lester’s boots!!!’ he proclaimed in triumph. He had liberated them from the weighing room, a crazy prize from the champion jockey.

My father was a very naughty man indeed and never met a rule he did not break, but he had a great respect for the sanctity of the weighing room, and was horrified. My mother instructed him to get up early the next morning, and drive back to Newbury, and return the boots.

Lester’s phlegmatic valet was unmoved. Apparently they were the oldest pair of boots and almost ready for retirement. Dad’s mad dash had been almost for nothing.

Mum used to laugh and laugh when she told this story. I don’t know why, of all the stories, this is the one I cherish most. I kept meaning to ask her to tell it again, so I could get all the details right, but I never did. I’m sad about that.

I’m sad that she did not meet Scout, my dear new mare, who stood by my side for ten minutes this morning, as if knowing I needed comfort. I had a wild plan to get the bed wheeled out to the front door with Mum in it, so I could bring the kind mare up the steps to say hello. Too late for that now.

I am making tomato soup for my dear, dear stepfather, because it is his favourite. ‘I must keep your strength up,’ I say, staunchly. We had breakfast together this morning, the house unbearably quiet as my mother’s spirit has gone from it. ‘It is so strange,’ we said to each other, over and over again. I had no idea how much she filled that house until she left it. She was still there, in the bedroom, but she was gone, and the absence was shocking.

I rang the Beloved Cousin first, because she is always my first call, and she is the wisest person I know. We were together for her parents’ deaths, and it was to her house I drove, in a lovely English spring, after my father’s funeral.

I spoke to my good sister, who is on her way north. We did not need to say much. We have been through this before. We know it all.

I talked to my cherished friend, The World Traveller, who said: ‘You will come here when you need to?’ I said: ‘Yes, because the only thing that makes death bearable is love.’ Then I made some mordant joke and we both laughed, and I said: ‘There it is. I’ve made my first death joke.’ (Did I mention that I am British? There must always be laughter and irony to go along with the tears. It’s our great cultural imperative.)

The Landlord called, to say that he would go and collect my sister from the airport. ‘You are so damn clever,’ I said. ‘That is what I need just now. Practical help.’ The practical is very important in grief, because one is all at sixes and sevens, and it’s hard enough to tie one’s shoelaces, let alone drive a motor car. That was a fine act of love, I thought. He is a proper human.

I went to the shop to get tomatoes for the soup. There was a new girl at the till, very friendly and jolly. ‘How are you today?’ she said.

I gave the standard answer. ‘Not too bad, thank you.’

In my head, I shouted: my mum died.

We talked about the weather, because that is what we do.

‘I hope you have a good day,’ she said, with a blinding smile.

MY MUM DIED, the voice in my head bawled.

It poured with rain this morning. Now the sun is coming out, thick and yellow and ancient.

My mother was brave and beautiful. She had some sad times in her life, more than I would wish, but she found great joy in the last years with the husband she loved so much, and who adored her. She went the way she wanted to, quietly, and with dignity, at home. She dreaded the hospital and the tubes and the machines. We dreaded that for her. In the end, she took it into her own hands. She did this thing, in the way she wanted. It was an act of will. She had had enough, and so she went. She is at rest.

Why do I write this now? The imperative to get to the keyboard and type was mighty. Give sorrow words, Shakespeare said. Words are my love and my solace; words, I sometimes think, are all I have.

I wanted to mark it; I wanted to pay respect. I wanted also, in a very plain and authentic way, to share it. I know that, out there in the long prairies of the internet, there are many, many people who know this grief, who will nod their heads, and say: ‘Yes, yes, I have heard the mermaids singing, each to each.’ (Actually, not that many people will say exactly that, but I always come back to TS, in the end.) What I mean is there is a communion in sorrow. We all have human hearts, and those human hearts creak and break and crack. And we all put them back together, with sellotape and binder twine and hope, and keep buggering on.

I miss my mum. I am passionately, profoundly glad that she is out of that wracking pain. But I miss her. Love is love.

This is my favourite picture of my mother, at the races, with my sister and the younger of my two brothers. Wasn’t she fine? 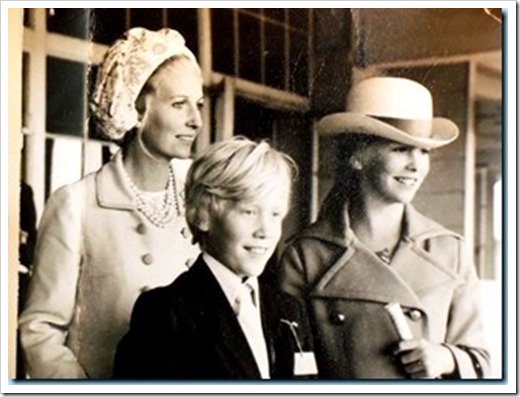 Email ThisBlogThis!Share to TwitterShare to FacebookShare to Pinterest
Labels: loss, love, my mother, the human heart