A ray of light?

I call my mother. She is very worried by the political situation. We discuss the precarious state of poor old Blighty's Triple A rating and the terrifying level of the national debt and how much blood and treasure the wars in Iraq and Afghanistan have cost. She is also worried about the looming council cuts.

'And they are threatening to close the libraries,' I shout. I have always fretted about the public libraries, our great unsung national treasures.

Even I, a lifelong Labour voter, have to admit that a change of government may be the only answer.

'Oh,' she says. 'But I would not want to be poor David Cameron.' Because the new crop of politicians are so young, and she has reached a venerable age, she always talks of them with maternal concern, as if worried that they are not getting enough iron in their diet, or they might forget to wear a vest in the cold weather.

'Ah,' she says, brightening. 'Of course. They always say: in a crisis, call for an old Etonian.'

'The war,' she says staunchly. 'Won on the playing fields of Eton.'

'That was the battle of Waterloo,' I say. 'And it was really quite a long time ago.'

Afterwards I think: maybe she has a tiny point. It's fashionable to write off Etonians as effete toffs, running around in those penguin suits with their top hats and their privilege. What can they know of the good ordinary hard-working Britons? The lesser-known fact is that this tiny elite school produced thirty-seven gallant recipients of the Victoria Cross. Almost two thousand of its alumni died in the two great wars. (Over ten thousand fought.) The much-admired Colonel H Jones, who fell at Goose Green, went to Eton. It also gave us William Gladstone, George Orwell, Robert Byron, Humphrey Lyttleton and Peter Benenson, who founded Amnesty International. (Benenson was an extraordinary man, who should be better known. When he was only sixteen, he set up a fund for the orphans of the Spanish Civil War. He went on to serve at Bletchley Park during the second war, breaking German cyphers; founded JUSTICE in the fifties, an organisation for human rights and law reform; and finally, with several others, started Amnesty.)

I don't know how much difference it makes, where you went to school. I usually think the Eton debate is a silly diversion, a shorthand for lazy inverted snobbery and the putting of people into reductive little boxes. I have an old-fashioned liberal belief in taking a person on their merits, not their accent. But wouldn't it be lovely if my old mum was right? Because if ever there was a crisis, we are slap bang in the middle of it, and someone must be called for.

Photographs of the day:

A lone Etonian, watched by local boys at the 1937 Eton-Harrow cricket match, by Jimmy Sime: 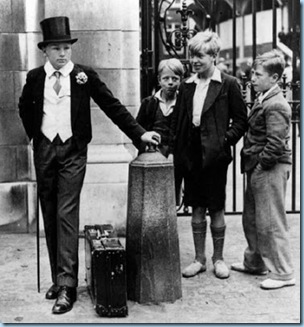